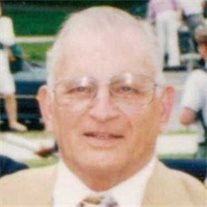 William H. Moyle, 90, of Lebanon, PA died Tuesday morning, September 25, 2012 at the Lebanon VA Medical Center. Born in Toronto, Canada on September 14, 1922, he was the son of the late Dr. H.B. and Emily Greenwood Moyle. His family moved to Hartford, Connecticut when he was 2 years old. He was the husband of Jane Hartzell Moyle for 68 years. William attended Mount Herman School in Northfield, Massachusetts. He continued his education at Dickinson College in Carlisle, PA. While attending Dickinson, he enlisted in the United States Marine Corps during WWII and then came back to finish at Dickinson. He continued his studies at The New York of Social Work which was associated with Columbia University, where he earned his Master degree in Social Work. William spent many years in Family Service Organizations, first in St. Paul, Minnesota, then in Meriden, CT and finally in Carlisle, PA. He ended his career in Social Work, working for the Pennsylvania Department of Aging in Harrisburg. William loved to travel and spent many happy years planning trips, which he and his wife enjoyed during his retirement years. He was a member of the Brethren In Christ Church, Carlisle. Surviving besides his wife are 4 children, Janet, wife of Delbert Smith, Florence, SC, Dr. Richard Moyle, husband of Lynne Shoemaker, Dundee, NY, Cheryl, wife of Rev. William H. Long, II, Lebanon, PA and Becky, wife of Brian Goins, Jacksonville, FL. He is also survived by 7 grandchildren and 6 great grandchildren. Family and Friends are respectfully invited to attend William's Memorial Service on Saturday, October 6 from St. John's United Church of Christ, 931 Willow Street, Lebanon, PA 17046 at 10:30AM with Rev. William H. Long II, officiating. Friends will be received at the church from 9:30 AM to 10:30 AM. Interment will be held in Indiantown Gap National Cemetery. Memorial remembrances in William's memory may be made to Lebanon County Christian Ministries, 250 S. 7th St., Lebanon, PA 17042 or St. John's UCC, 931 Willow St, Lebanon, PA 17046.

William H. Moyle, 90, of Lebanon, PA died Tuesday morning, September 25, 2012 at the Lebanon VA Medical Center. Born in Toronto, Canada on September 14, 1922, he was the son of the late Dr. H.B. and Emily Greenwood Moyle. His family moved to... View Obituary & Service Information

The family of William H. Moyle created this Life Tributes page to make it easy to share your memories.

Send flowers to the Moyle family.